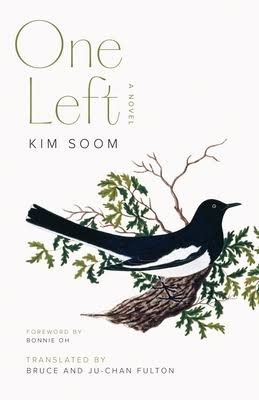 On Sunday, September 27, 2020, KAHS in collaboration with Town Hall Seattle and University of Washington Press hosted a virtual town hall featuring Bruce and Ju-Chan Fulton, translators of “One Left” a Novel by Kim Soom.

During the virtual town hall, the Fultons shared with the audience why they decided to translate the novel and the many challenges they encountered in publishing the book, followed by a lively question and answer session.

“One Left” is a historical novel about Korean girls who were forced into sexual servitude for the Japanese soldiers during the Pacific War. Kim Soom, based on testimonies of dozens of sexual slaves, weaves a provocative story about a woman who reflects on her past, as she learns that the last known sex slave (comfort woman) is dying, and contemplating whether to tell her story – being kidnapped at age thirteen, the horrors she and others endures, and then life of shame, fear, and isolation as woman back in Korea.

Based on extensive research, there were over 200,000 Korean girls (and countless other Asian girls) that become sexual slaves. Yet, only 10% of the Korean girls survived and returned to Korea, where they lived as social outcasts.

If you missed the townhall, you can view the livestream HERE.

A synopsis of the town hall by Northwest Asian Weekly may be found HERE.