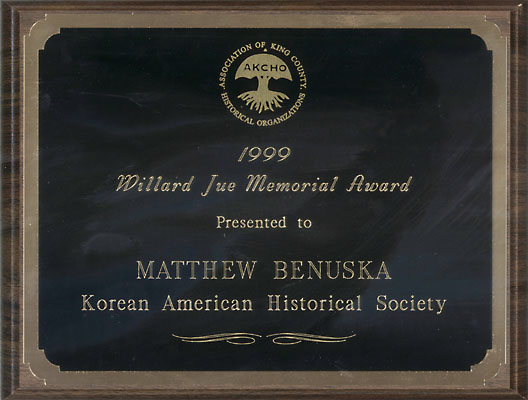 On May 25, 1999, the Association of King County Historical Organizations (AKCHO) presented Deputy Director and Assistant Editor Matthew Benuska with the Willard Jue Memorial Award for his outstanding service to Korean American Historical Society.

The award, in honor of the late community leader and Wing Luke Asian Museum boardmember Willard Jue, is presented to individuals in two possible categories (paid staff and volunteer) who have made outstanding contributions, provided exceptional leadership, and demonstrated excellence in duration, quality, or spirit of service.

Matthew Benuska, who has a Master’s degree in public administration from the University of Washington, and is vice president of Korean American Professionals Society (KAPS), was nominated in recognition of his instrumental role in organizing and developing KAHS through establishing administrative procedures, and growing membership and resources in addition to producing Occasional Papers.

A native of Texas, he became interested in Korea after living there for a year as an exchange student at Yonsei University’s International Division during the 1988 Olympics. He studied Korean language, politics and economics, and photographed demonstrations. After receiving his BA in psychology and political science in 1990, he moved to Seattle and received his MPA in international affairs in 1995. He joined KAHS at the end of that year. A member of KAPS since 1996, he enjoys being active in the Korean American community and speaks some Korean.